March 05, 2010
In my freshman year of college, I was enrolled in a class which introduced new students to collegiate academic concepts through a semester-long theme. Our class’ theme was film and our brave professor, Lara Scott, a young, intelligent art professor who had studied at Yale, had the grueling task of teaching seventeen relatively conservative young adults to move beyond the accessible blockbuster films they enjoyed and to evaluate worldview, character and narrative in films they might never have chosen by themselves.

[It was Prof Scott’s misfortune that nearly every one of those seventeen students became good friends and spent every meal, every evening, every day in each other’s company. We were a many-headed animal which moved in a large, energetic clump of arms and bags and loud voices. The small college community wasn’t sure what to do with this nuclear group which very quickly developed a set of its own behaviors, expectations and routines. We were frequently referred to as a “cult,” a name which at the time offended me, and now seems funny and the only word for the bizarre beginning to my college experience. 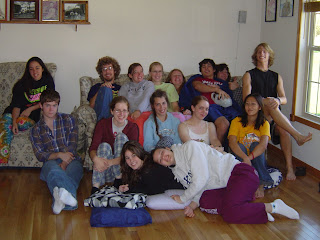 [Bleary morning picture before going to Six Flags, which would become a tradition]


This group did not hold together or remain as intimate or intense for all four years of college. The fire burned itself out. Still, it is a spider-web linking us together. I still feel the phantom strings tugging from my friend Alyssa in Brooklyn, and the friend in medical school, the friend in Hollywood, the one I went to England with, the ones that got married. My dearest friends came from that class: Laura, who shares a birthday with me, and Kristin, with whom I share an apartment. Unbelievably, all three of us live in the same city, two thousand miles away from our college. I am a bridesmaid at their weddings this summer.] 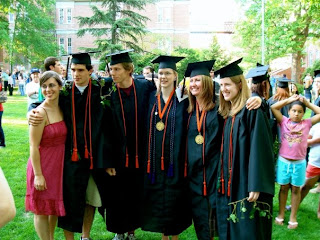 We watched six films that semester: The Iron Giant, Nightjohn, Babette’s Feast, Whale Rider, About a Boy, and the Station Agent. We balked at the slow scenes. The cinematography and the foreignness of Babette’s Feast was painful; Nightjohn conspicuously lacked in Hollywood sparkle; we weren’t sure whether we liked the Station Agent and its random collection of personalities.

About a Boy was the most approachable film. The night we watched it, we had been celebrating Homecoming by dressing up and eating spaghetti at a small restaurant in Highland, Illinois (where Sufjan Steven saw a UFO in his Illinoise album), twenty minutes from campus. Conscious of our professor’s wrath, we drove eighty miles an hour to get to reach the viewing in time, and burst through the door a few minutes late in dresses and tuxes.

All this to say that without Professor Scott’s freshman class, without that exposure to unfamiliar, strange, uncomfortable – and sometimes uncool – films, my experience with film might have always remained narrow. It is slow growing, but under the influence and advising of others who know better, I have begun to watch film with greater risk. Sometimes this goes well (Guillermo Del Torro’s Pan’s Labyrinth) or Woody Allen's Vicky Christina Barcelona, and sometimes this goes badly (Catherine Breillat’s Fat Girl).

Thank goodness Arts and Faith, an online community allied with Image, has put together the 2010 list of 100 Top Films - a compilation chosen by a group of film critics, professors, writers, artists, parents, clergy etc. (This list features, funnily enough, features Babette’s Feast in the top ten films.) You can be sure I’m going to use this as a source for future meetings of the nascent Film Club.

Spend some time looking at the website, which if I may say so (I helped with the project), is outstanding. Every film has been chosen carefully and offers viewers the chance to go beyond the barriers of their personal taste and customary choice, and to widen the palate with a list celebrating cinematographic excellence.

Unknown said…
love this and these pictures. poor prof scott-- but it makes me get a little choked up to think how we've all stuck together. :)
March 6, 2010 at 7:42 PM

Chad said…
I just found this blog today, and I'm really loving everything about it. I see that you write primarily about books, but I was wondering if you might consider writing a piece for the film site I run, A Bright Wall in a Dark Room: http://brightwalldarkroom.tumblr.com

I think you write (and reflect) wonderfully and would LOVE to have your voice on our site in some way! If you're interested, drop me a line at everybodycares@gmail.com

Keep up the good work,

Popular posts from this blog

November 22, 2017
There’s a sudden late surge of warmth in the rough winds today and it’s the perfect day to read one of John Clare’s best sonnets:

1 comment
Read more
December 12, 2017
I’ve a short story in the latest edition of The Stinging Fly, which is a brilliant Irish literary journal. If you’d like a copy (or if you like Claire-Louise Bennett or Kevin Barry or Danielle McLaughlin or Colin Barrett, who’ve all been published by SF) you can get it here Or, you know, go to Dublin.
1 comment
Read more

November 17, 2014
I’ve returned to Minnesota to find it transformed into a Brueghel painting.

Our hunters are gone north or even south, wherever there are more deer. This has been a bad year for deer, threatened by the cold of last year’s polar vortex and the high population of coyotes, which now carry a bounty on their heads.

So, while it’s still autumn in England (I’ve been assured), winter has come. The nights are long, the wreaths are out. I’ve been reading restlessly – Robert Walser and GB Shaw. But some nights, Thomas Hardy feels just right for November melancholia. Here’s ‘A Darkling Thrush’:

I leant upon a coppice gate
When Frost was spectre-grey,
And Winter's dregs made desolate
The weakening eye of day.
The tangled bine-stems scored the sky
Like strings of broken lyres,
And all mankind that haunted nigh
Had sought their household fires.

The land's sharp features seemed to be
The Century's corpse outleant,
His crypt the cloudy canopy,
Th…
1 comment
Read more